On the Release of Barabbas 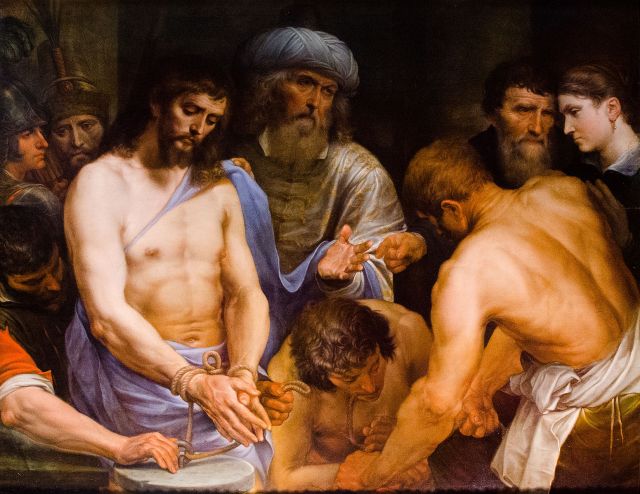 My God, I firmly believe that Thou art here present. I acknowledge that on account of my many sins I am utterly unworthy to appear before Thy sacred countenance. Yet, confiding in Thy infinite goodness and mercy, I venture to address Thee, to call upon Thy holy name, and meditate upon Thy commandments, in order that I may acquire a better knowledge of Thy holy will, and accomplish it with more fidelity. Wherefore enlighten my understanding that I may perceive what I ought to do or leave undone for the promotion of Thy glory and my own salvation; at the same time excite my will, that I may repent with my whole heart of my past sins, and resolve for the future to do all that Thou requirest of me. Grant me above all to know Jesus, my divine Teacher and Guide, more clearly, that I may love Him more dearly, and consequently labor, struggle and suffer with greater generosity and self-sacrifice in imitation of His example. Holy Mary, Mother of God and my Mother, show Jesus to me now, and let me study thy divine Son to the salvation of my soul. Holy Guardian Angel, keep far from me all distracting thoughts; my patron saint, come to my assistance. Amen.

On the Release of Barabbas.

Realize to-day, my soul, to the best of your ability, the striking contrasts presented by the scene in the history of our Lord’s Passion when He is placed in opposition to Barabbas. Pilate again had found no fault in our Lord, and consequently he resorts to what appears to him a sure method of setting the innocent Prisoner free. He places Him beside a murderer, and then appeals to the people, saying: “Whether will you of the two to be released unto you?” (St. Matt, xxvii. 21.) Picture to yourself the Saviour standing there, holy, innocent, adorable, the Benefactor of the Jewish people, who fed them in the desert, who healed their sick in towns and villages, and beside Him a sinister-looking criminal as unlike Him as darkness is to light, one on whose brow vice is plainly written, on whose soul rests a heavy load of guilt; yet the deluded populace give the preference to this infamous wretch rather than to the Holy One of Israel! This is indeed a strange, a sorrowful sight!

1st. Consider how innocence is forsaken. See how Barabbas, a man notorious for his crimes, finds many partisans, nay, a whole nation clamors for his release, whereas Jesus, the Source of life in contrast to this murderer, the Mirror of sanctity in contrast to this villain, the Benefactor of the people in contrast to this outrager of the public safety, Jesus stands alone; not a single voice is raised to befriend Him; on the contrary a thousand voices cry: “Let Him be crucified.” Well indeed may St. Augustine exclaim: “O fools, what is it that you demand? It is nothing else but that He who raised the dead to life should Himself be slain, and he who destroyed the living should have his life spared to him.” Reflect, my soul, upon this truth, that in the world innocence most frequently stands alone, forsaken by all; and ask yourself whether you have not sometimes abandoned your fellow man when he was reviled by the tongue of slander, persecuted by the hand of envy and malice; whether under such circumstances you have not left him helpless, without speaking a word in his defence, or endeavoring to console him.

2d. Consider how inconstant men are. Only a few days previously the very same multitude were almost frantic with exultation, intoxicated with delight and rapture in accompanying with hosannas “Him that cometh in the name of the Lord;” in fact only a little more was wanting and they would have taken Him and made Him their king by acclamation, in preference to all others. Now, a few days later, the mere sight of the self-same Individual excites them to an indescribable fury of hatred and anger, and they give Him the last and lowest place, preferring a common murderer to Him. Let this be a warning to you, O Christian. Do not be too much concerned as to whether you are praised or blamed, blest or curst by your fellow men. For if they behaved in so false and fickle a manner in regard to your Lord and Master, how can you, His servant and disciple, expect better treatment at their hands? Men are unstable and their judgments are only too unreliable. Wherefore do not dread the criticism, do not pay too much heed to the opinion of a man who to-day is and to-morrow is no more, but fear God, Who ever remains unchangeable. Barabbas, acquitted by the popular voice, was not acquitted by God, and our Lord, condemned and sentenced to death by the fickle mob, was justified in the sight of God. As an example to you see how a few days ago He was as indifferent to and unmoved by the acclamations of the people as He now is by the hatred they evince toward Him.

3d. Consider how often you commit the same sin of which the deluded Jewish people were guilty. Every temptation to sin is nothing more or less than the question put to you, whether you value more highly Christ or Barabbas, the Creator or the creature; whether you give the preference to the will of the Most High or the sinful propensities of your fallen nature. And as often as you yield to the assaults of the world, the flesh and the devil, you cry with the Jews: “Away with this Man! Away with Christ, away with His grace, away with His law; set free the passions that law restrains; release the murderer of my soul, the robber that deprives me of my eternal felicity.” What a terrible, appalling cry! Alas! how often is it heard from your lips?

My God, I give Thee heartfelt thanks for all the graces and all the light Thou hast conferred on me during this meditation. Pardon me all the negligence and the distractions of which I have been guilty, and give me strength to carry out the resolutions that I have made. Fortify me, that from henceforth I may diligently practise this virtue . . . avoid this fault . . . perform this action . . . to Thy honor. Help me to do this, sweet Virgin Mary; and if I ever forget my good resolutions, I entreat my Angel Guardian to recall them to my memory. Amen.

7 Responses to On the Release of Barabbas