Save us in the hour of our death, and bring all souls to heaven

Posted on September 1, 2010 by joyfulpapist

Have you noticed that, when someone dies, the platitudes all assume that the deceased has gone straight to heaven? Regardless of religion or lack of it; whatever the known misbehaviour of the deceased?

This ubiquitous belief in a better life beyond the grave would have seemed very strange to our ancestors – whether they believed in an unending cycle of rebirths, in a dry, dusty, lifeless Sheol or Hades, or in some form of judgment – with rewards for the virtuous and punishment for those whose souls weighed heavy in the balance. Heaven for everyone? No room for you pagans in our Valhalla! 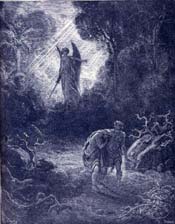 The Catholic Church, of course, teaches that we cannot win our way to Heaven through virtue, and that our souls weigh heavily in the balance – through no personal fault – from our first moments. Our species was intended for immortality. Our remote ancestors needed but one act of righteous obedience to win that prize to pass onto their descendents. But they fumbled the first fence out of the gate, and instead of inheriting righteousness, we have inherited the tendency to aim everywhere else except God.

So God tried again, and this time He did it himself; carrying out that one profound act of obedience on the cross, and granting us the grace to share the prize. Step by step, day by day, Catholics believe, those who co-operate with God are infused with righteousness, becoming more and more like Christ – that is, more and more fitted for immortality.

When those who would become known as the Protestant reformers rejected the doctrine of Purgatory, it had a history that went back well before the time of Christ in Judaic beliefs about prayers for the dead. Here’s a summary of the biblical foundations of the doctrine.

To those who would later be called Protestants, salvation was simple. They knew us to be intrinsically unfit for immortality, but believed God freely grants where he chooses the merits of Christ. The saved go to Heaven, they said, the unsaved to Hell.

Salvation as a free gift from God

So the doctrine of Purgatory rests on a fundamentally different understanding of salvation, summed up in the arguments that raged over the doctrine of Justification. ‘Sola Fides’, said the reformers, ‘by faith alone’. And they accused the Catholic Church of teaching that people could earn – and even pay – their way into heaven. Not so, said the Council of Trent, rejecting not only Protestant doctrine but also medieval excesses. We are saved through grace alone – and our co-operation with that grace is not to our own merit but is itself a gift.

For the definitive resolution of these debates, see the joint statement of the Catholic Church and the Lutheran World Federation, signed in 1998, which says:

38.According to Catholic understanding, good works, made possible by grace and the working of the Holy Spirit, contribute to growth in grace, so that the righteousness that comes from God is preserved and communion with Christ is deepened. When Catholics affirm the “meritorious” character of good works, they wish to say that, according to the biblical witness, a reward in heaven is promised to these works. Their intention is to emphasise the responsibility of persons for their actions, not to contest the character of those works as gifts, or far less to deny that justification always remains the unmerited gift of grace.

God have mercy on me, a sinner

The gift of grace begins to prepare us for Heaven. But what happens if we die before that work is completed in us? What of those saved who are not yet able to bear to stand in the presence of our awesome God? The Catholic Church teaches that those in Purgatory are saved and are destined for Heaven, but are not yet ready.

Here’s a speculation of my own about the nature of Purgatory.

And here is an article about a vision of Purgatory of a Catholic nun, St Catherine of Genoa.

Where do indulgences come in?

This brings us back to indulgences.

An indulgence is defined as “the remission before God of the temporal punishment due for sins already forgiven as far as their guilt is concerned.” The first thing to note is that forgiveness of a sin is separate from punishment for the sin. Through sacramental confession we obtain forgiveness, but we aren’t let off the hook as far as punishment goes.

Indulgences are two kinds: partial and plenary. A partial indulgences removes part of the temporal punishment due for sins. A plenary indulgence removes all of it. This punishment may come either in this life, in the form of various sufferings, or in the next life, in purgatory. What we don’t get rid of here we suffer there. http://www.catholic.org/prayers/indulgc.php

Indulgences ‘go with’ a discussion on Purgatory in the sense that an indulgence allows us to get through purgatory faster.

I’ve heard it explained that – through an indulgence – God applies the merits of Christ and the saints to our defects, thereby cancelling out part of what we owe for our sins. (We can also do the work of an indulgence for someone who has died, offering our effort and faith to reduce their time in Purgatory.)

To take an analogy, think of someone condemned to death for a bombing in which a number of sole breadwinners died. He is truly remorseful, and wants to make recompense. He is allowed to live – a grace freely given. That is analogous to the free gift of grace which is our salvation.

But the orphans of the dead are still orphans; he still owes them. Imagine our contrite bomber working three jobs to earn enough to support these step-removed victims of his, and staying awake at nights to think about how he can do more. Imagine he mortgages himself for life in return for a lump sum that will pay for housing, schooling, and other practical support for the orphans. That’s the temporal punishment due to his sin.

If someone says: ‘I forgive you the bombing’, it will make no difference to the debt the bomber owes. But if a multi-millionaire freely comes up with the money to pay the debt in full, and to provide any other support the orphans need, the bomber can go free. That’s analogous to an indulgence.

As easy as that?

Of course, it isn’t as easy as all that. Indulgences aren’t just handed out like candy. The Church’s handbook on indulgences, the Enchiridion of Indulgences, says:

To acquire a plenary indulgence it is necessary to perform the work to which the indulgence is attached and to fulfill the following three conditions: sacramental confession, Eucharistic Communion, and prayer for the intention of the Sovereign Pontiff. It is further required that all attachment to sin, even venial sin, be absent

The last one is tough. To gain a plenary (full) indulgence – a remission of all temporal punishment for sin – you have to be in such a state of grace that you no longer think about anything that is sinful in even the smallest degree.

It seems to me that indulgences work by turning our minds to God, and therefore opening us up to the work of His grace. God’s abundance is available to us – indulgences are a discipline that helps us get out of the way of the reform He is working on our souls. And I need all the help I can get!

JoyfulPapist is an adult convert to Catholicism, with a passion for her God, her faith, and her church.
View all posts by joyfulpapist →
This entry was posted in Church History, Devotion, Living Catholic lives, Satan and hell and tagged Heaven, Hell, Justification through grace, Partial indulgence, plenary indulgence, Purgatory. Bookmark the permalink.

18 Responses to Save us in the hour of our death, and bring all souls to heaven