One cannot be an Anglican and use the Roman Missal – it is one or the other, so says Bishop of London.

From: The Catholic Herald.

The Bishop of London has written a letter about the Eucharist, which makes interesting reading, and which can be read in full here. I am not an Anglican, and therefore it is not my place to comment on what Dr Chartres has to say to his flock, but there are some things that he says which reflect on us Catholics, which I feel I must comment on. 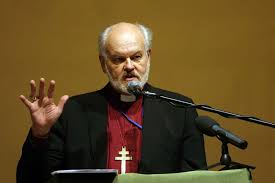 In an age when Aristotle’s analysis of objects in the physical world as being composed of “essences and accidents” was widely accepted, transubstantiation was seen to have value as a picture of how the eucharistic elements were transformed. In the Windsor Agreed Statement which emerged from the first series of international discussions between Anglican and Roman Catholic theologians, transubstantiation appears only in a footnote as “affirming the fact of Christ’s presence and of the mysterious and radical change which takes place. In contemporary Roman Catholic theology it is not understood as explaining how the change takes place.”

The Bishop then goes on to talk about the “new rites” that the Catholic Church will be adopting this Advent. This is misleading. There are no new rites, there is merely a new translation of the Roman Rite. There has been no innovation, but rather a return to the original text, through greater fidelity to the Latin. But the Bishop says: “The new Roman rite varies considerably from its predecessor and thus from Common Worship as well.” The first part of this statement is simply factually incorrect; the second part leaves me wondering. What did the old translation have in common with Common Worship that the new translation does not? The Bishop refers to “a convergence of eucharistic doctrine and rites” between Anglicans and Catholics, but he gives no evidence for this optimistic view. Perhaps he means that Common Worship has been modeled on the old translation of the Roman Missal. But what he says about transubstantiation above indicates to me that there has been no substantial convergence, even if there may have been some accidental ones. (That Aristotelian language again!)

Then the Bishop delivers his bombshell, if it may be termed such:

Priests and parishes which do adopt the new rites – with their marked divergences from the ELLC [English Language Liturgical Consultation] texts and in the altered circumstances created by the Pope’s invitation to Anglicans to join the Ordinariate – are making a clear statement of their disassociation not only from the Church of England but from the Roman Communion as well. This is a pastoral unkindness to the laity and a serious canonical matter. The clergy involved have sworn oaths of canonical obedience as well as making their Declaration of Assent. I urge them not to create further disunity by adopting the new rites.

Of course, His Lordship is completely right about this. The use of the Roman Missal, in whatever translation, by someone, anyone, who is not authorised by a bishop in communion with Rome, is absolutely wrong. Dr Chartres even goes so far as to mention canon law, which is, I believe, but rarely invoked in the Anglican Communion, which shows how seriously he takes this matter.

The Bishop seems to be putting clear blue water between us Catholics and his own flock, perhaps more clearly than he intends. It is clearly wrong for Anglican clergy to use the Roman Missal, from both an Anglican point of view and from our point of view. But I would add this: the Roman Missal, especially in the new translation, reflects a very clear belief in the doctrine of transubstantiation which Anglicans do not hold. Therefore they should not use the Missal. Or if they do hold to the doctrine of transubstantiation, they should come into the Ordinariate.

“Three priests in the Diocese have taken this step. They have followed their consciences,” remarks the Bishop speaking of the Ordinariate. Is there a third way? It would seem not. Dr Chartres, while mentioning canon law and its obligations, nevertheless makes no threats: “There will be no persecution and no creation of ritual martyrs,” he says. But the appeal to conscience and indeed logic is clear in this powerfully argued letter. You cannot be an Anglican and use the Roman Missal. It is one or the other. On that all should agree.

Alexander Lucie-Smith is a Catholic priest and a doctor of moral theology. The author of several books, he was born in West Sussex, educated at Oxford and in Rome, and has lived in Malta, Italy, and Kenya,

10 Responses to One cannot be an Anglican and use the Roman Missal – it is one or the other, so says Bishop of London.