The View from Nazareth 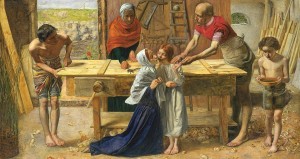 Christ in the House of His Parents by John Everett Millais

“All things have their season, and in their times all things pass under heaven.”
*
This passage from Ecclesiastes—about there being a time to be born and a time to die, a time to cast away stones and a time to gather them together, and vanity, and dust—well, it’s pretty grim stuff if you take it in the wrong light. But hold it up to better light and it’s oddly comforting. This life is short, but the next life is everlasting. If we invest our time on earth wisely, however little time we might have, then we have nothing to fear. (Matt. 25:14–30)There’s a story about Saint Francis of Assisi, which I’m sure you’ve heard some version of. Francis was in his garden planting tomatoes when one of his brothers came to him and asked, “If you knew that Christ would return tomorrow, what would you do?” I’m sure most of us would say, “Go to confession,” “Say a rosary,” or “Apologize to my sister.” We’d make some last-ditch effort to cleanse our soul before judgment. But not Saint Francis. He paused for a moment and then said, “Finish planting my tomatoes.”This tells us two things. First, the blameless man is fearless. Death holds no terror for the man who fears God and keeps His laws. Second, even the greatest ascetic in Church history found time to play in the dirt. Not one of us—not even the Poverello—is called to spend all his days weeping for his sins, much less his mortality. As King Solomon reminds us, there’s a time to weep, and a time to laugh; a time to mourn, and a time to dance; a time to cast away stones, and a time to gather stones together;
a time to embrace, and a time to refrain from embracing… (Eccl. 3:4–5)

In the middle of a global pandemic—definitely a time to refrain from embracing!—it’s too easy for us to lose the rhythm of the seasons. Time feels a little unreal. We’re trapped in these long months between winter and spring, after the snow melts but before the flowers bloom. The earth and the sky have a grey, sickly pallor. And here we are, stuck in our houses—with no work, no parties, no concerts, no sports, and no Mass. So, we plop ourselves down on the couch with a six-pack and watch X-Files reruns. Every ten or fifteen minutes, we check Twitter for the latest death toll or refresh The New York Times coronavirus map, watching the plague spread in real-time across the United States.

That’s the way of the world. The 24-hour news cycle sucks us in with its fear-mongering—but don’t worry! There’s always some distraction at hand to dull your senses for a little while: Bud Light, Netflix, Amazon, Xbox, OnlyFans… Pick your poison.

The news is now on overdrive. Every journalist in America is casting around furiously for the hottest take, the grimmest prediction, and the sweetest old lady who died the loneliest death. The Covid pandemic has been a feeding frenzy for the media (i.e., the current-events arm of the entertainment industry). They play our anxious heartstrings like Andres Segovia on a Spanish guitar.

Maybe this disruption in our comfortable, predictable lives is just what we needed.

Our society gives us the illusion of control. Any social or cultural problem can be solved by voting for the right party or donating to the right candidate. Any feelings of loneliness can be relieved by logging onto Facebook or setting up a Tinder “date.” If you get bored with your wife, divorce her and find a new one! Hell, if you get bored being a man, put on a dress and say you’re a woman! Medical technology extends our lives far beyond what nature can support—but, don’t worry, if it gets boring or hard, you can always commit “physician-assisted suicide.”

The glory of Christianity is the revelation that we’re not in control: God is. And our only job is to trust Him. We don’t need to worry ourselves sick trying solve all the world’s problems, because “the foolishness of God is wiser than men, and the weakness of God is stronger than men.” (1 Cor. 1:25). We have no need to fear “those who kill the body but cannot kill the soul”—only “him who can destroy both soul and body in hell.” (Matt. 10:28) Even then, we have Christ’s assurance: “I am the resurrection and the life; he who believes in me, though he die, yet shall he live, and whoever lives and believes in me shall never die.” (John 11:25–27)

“The world is too much with us,” said Wordsworth, and I think we’re all inclined to agree. That’s why our Holy Mother Church calls us to imitate Saint Joseph, the carpenter from Nazareth. He exemplified the hidden life—a life of complete confidence in God, desiring Him and Him alone. Though descended from King David, he never held political office or even voted in an election. What furniture he owned, he made for himself; what clothes he wore, his wife made for him. And there, in the kitchen of his little house in the foothills of Galilee, he would spend his evenings watching the Blessed Virgin Mary play with her Son, God Himself made flesh.

The government has ordered us to hide ourselves, though maybe we should have been hidden all along. We have no need for the world of getting and spending, of feuding and factionalism. This pandemic will be the death of globalism. Maybe it will also be the rebirth of domesticity—those simple joys of duty, piety, and gratitude. As Saint John Henry Newman wrote,

Hid are the saints of God;—
Uncertified by high angelic sign;
Nor raiment soft, nor empire’s golden rod
Marks them divine.
Theirs but the unbought air, earth’s parent sod
And the sun’s smile benign;—
Christ rears His throne within the secret heart
From haughty world apart.

So, here are a few things we can do to live the hidden life in the Age of Covid.

1) Withdraw from the news cycle. “Read not the Times,” Thoreau counseled, “Read the Eternities.” We can throw away the newspapers, turn off the television, and log off social media. Cultivating a healthy detachment from the world begins with refusing to obsess over the coronavirus. Even if it can’t infect our lungs, it may still infect our brains. We need to take the necessary precautions.

2) Rediscover life’s simple pleasures. C.S. Lewis once said that he never subscribed to newspapers so as to remain “unspotted from the world.” If you must check the news, he urged, always use “mouthwash” afterwards: read a work of good literature, like Lord of the Rings. I’m sure every Crisisreader has a stack of books next to his bed which they’ve been meaning to tackle for months now. Now is the time to tackle it. (For those who don’t have one, I’ve posted a little list of suggested titles at the end of this article.) Many folks are learning to bake bread. I’m learning to play the penny-whistle, and my sainted wife is learning to enjoy the penny-whistle. Plant a garden. Take up birdwatching. Write letters by hand. Memorize poetry.

3) Discipline yourself. Without the routine of a 9-to-5 workday, it’s too easy to become a slob, never quite working, never quite resting, just fretting away the hours. And, without Mass, it’s too easy to slip away from our spiritual practices. We have to regulate our own lives now. We might rise at 6 a.m. and pray Lauds, shower at 7 a.m. and put on a tie, eat lunch at noon, and then say a rosary. We can stop working promptly at 5 p.m. and “go home,” even if it’s just closing the laptop, taking off one’s tie, turning on the classical music station, and fixing oneself a cocktail. We can set aside an hour or so for spiritual reading—the Bible, the Imitation of Christ, or the Confessions of Saint Augustine, or some other spiritual classic. And we can go to bed at 10 p.m. and pray Compline.

4) Stay connected. It’s too easy for us to lose ourselves in Netflix or social media. If you have a family, set aside an hour or two during the day to talk, sing, play board games, or watch a movie with them. If you live alone, Skype with your friends, organize a Bible study over Zoom, or make an account at chess.com or playdiplomacy.com. In both cases, call your mom. Call your aunt. Call that cousin you haven’t spoken to in ten years just to see how he’s holding up. We’re learning the hard way that all of our gadgets and baubles don’t console us in a real crisis. Nobody is going to get through this without family and friends.

5) Practice gratitude. And I do mean practice, because it seldom comes naturally. But the more you practice, the more natural it feels. As G.K. Chesterton noted, “The man with a gigantic power of enjoyment goes through life very quietly, for he can enjoy quiet things.” (G.K. was one such man. One day, his wife Frances was in the kitchen making supper when she heard Mr. C. fall out of his chair and cry out, “Frances! Frances!” She flew into the room, certain that her husband was dying of a heart attack; instead, he stood gazing out the window. “The grass, the grass…” he muttered. Then he turned to face her, his eyes wide with reverence and awe. “It’s green.”) Now more than ever, we must concentrate on the blessings we’ve been given—not those we’ve lost or lack.

6) Accept your limits. Practice social distancing, stay at home except to buy groceries or go out for some exercise, wearing a mask when you go out in public, and check on your sick or elderly neighbors. If you haven’t lost your job, give money to one of the many charitable groups helping families whose breadwinners are now unemployed. Beyond that, there’s nothing else you can do. You’re doing all you can do. If it still doesn’t feel like you’re doing enough, bow your head and pray: “O Lord, make me to rest in meekness and lowliness of mind.”

7) Spend time with God. This isn’t quite the same as #3. Chanting the psalms and meditating on the mysteries of the rosary wonderful, but contemplation also has its place. Dan Rather once asked Mother Teresa what she said when she prayed. “I listen,” she replied. “Well then,” Rather asked, “what does God say?” She smiled. “He listens.” What better remedy for our frayed nerves than to be silent and still in the presence of the Divine? Sit and listen to God while He sits and listens to you—like Saint Joseph in his kitchen.

1 Response to The View from Nazareth